In the midst of a pandemic, Marist has been lucky to host two international exchange students: Julia Hagel and Cassandre Fauvel, both of whom are here for the second semester of sophomore year.
Hagel comes from the town of Kisslegg in Baden-Württemberg, Germany. She used an exchange program called J1 to choose her country, state, town, and even school. Hagel chose Marist as “it was the nicest school.”
Fauvel comes from Le Havre in Normandy, France. She used the ISPA exchange program to pick her country. She chose the U.S. because she wanted to experience a new culture. “I have traveled all around the world, and everyone spoke English, which made me want to master the English language,” Fauvel said.
While Hagel doesn't have anything in particular she wants to try in the US, Fauvel hopes she can experience an “American Sleepover” as viewed in American media. Hagel has appreciated the kindness and consideration of the people she has met.
While Hagel feels no homesickness whatsoever, Fauvel admits she misses the food, particularly french baguettes. Fauvel has enjoyed going to Dutch Bro’s and “riding in the car blasting music with friends.”
Hagel and Fauvel have adapted well to American high school life. “Everyone is very helpful,” remarked Fauvel. Both of them find school significantly more manageable and in comparison to their home schools. “I usually take fourteen classes at my German high school,” said Hagel. “It's a lot less stressful here.”
Fauvel joined the Marist Theatre Club, and was able to go to some football games.
When asked about the European perception of Americans, Both Hagel and Fauvel said that Americans are stereotypically viewed as having no understanding of geography, loving fast food, and watching TV all the time. While both disagree with the latter of the two, they can neither confirm nor deny American’s geography skills. 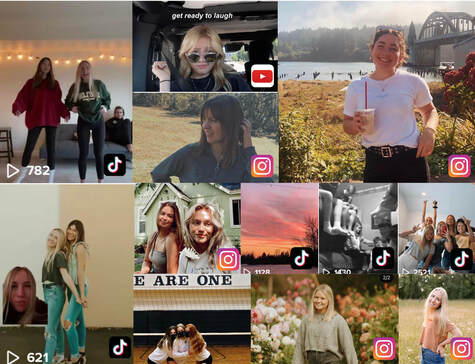 Social media has found its place on billions of people’s home screens across the world. Arguably the most popular among these, are streaming platforms TikTok and Youtube, which are designed for entertainment and creation.
With over 1 billion users worldwide, TikTok is available in over 150 countries, giving it the ability to link people across the world. The online platform allows users to create, share and enjoy short videos which range anywhere from 15 seconds to one minute. Many students here at Marist contribute to that 1 billion, creating and sharing videos of their own.
“The videos I make are inspired by things that make me happy and moments in this stage of my life that I can look back at when I’m older,” senior Whitney Korth said.
Other students made similar remarks, saying they made TikToks for fun or with friends as a way to pass time.
“My TikTok is just for me to post what I think is funny and I just like to go and look back at them,” senior Lindsey Sargent said.
Many users get inspiration from each other, seeing videos that they find entertaining and adding their own twist to it. This allows the TikTok community to create videos along the same lines, yet each one unique and just as creative or funny.
“I don't have many videos on TikTok but I usually get inspiration from other videos I see,” senior Hagan Stephenson said.
As opposed to TikTok’s 1 billion monthly users, Youtube brings in 2 billion monthly users, making it one of the world’s most visited sites. Popular amongst people of all ages, Youtube permits users to create and watch longer videos. Marist sophomore Tilly Bremner has created her own account, making and uploading videos of her own.
“I thought this was such a cool way to let out my creativity and wanted to give it a go,” Bremner said when asked why she first started making videos.
“I just create whatever comes to mind or whatever inspires me. If I see someone else doing something that I think is really cool I take it and put my own spin on it.”
Social media has captured the attention of billions worldwide and the creativity and imagination seen on the platforms has been a source of entertainment and enjoyment for many years. At Marist, it has been a way for students to connect with one another and capture fun, happy memories. ​

The clubs offered at Marist are a great opportunity to connect with others and discuss topics that are important to them. In the midst of a pandemic, many students have created new clubs and started the transition from Zoom to in-person meetings.
Sophomore Alex Chavez started Justice Action at Marist, and they meet on Zoom twice a month.
“The ultimate goal of this social justice club is to educate the Marist community and open up discussion on prominent issues that minorities and marginalized groups face in our community and create positive change,” Chavez said. JAM club has an Instagram page with 85 followers.
Junior Tess Kim started a new club called Women in STEM (Science, Technology, Engineering and Math).They meet in-person every Wednesday in science teacher Sahra Nielsen’s room to build kits and code information for projects.
“The ultimate goal is to bring more females into the STEM field which allows them to express themselves creatively and analytically. I also thought it would be just a fun opportunity to 3D model, code, and build stuff that applies to real world applications,” Kim said.
Junior Cece Faulkner started Feminst Foundations. They meet on Zoom once a month. Faulkner hopes to “raise awareness and empowerment and make people feel heard,” Faulkner said. With the help of English teacher Britton Reeser, the members discuss safety, equality, and possible service opportunities in the community for women.
Most recently, the Marist Aerospace Research Society met for the first time last Wednesday in Mr. Moser’s room during lunch. They’ve created experiments with different types of plants in imitation soil in small groups. MARS will be meeting today at lunch.
These students have started clubs in the midst of a pandemic and truly have made the best out of a challenging situation and have used this time to promote causes that they are passionate about.

Recently, senior Jack Thornton and Marist chaplain Father Theodore Lange sought out to build a new altar for the Marist Chapel. Thornton did most of the design and planning of the altar while the woodworking was outsourced to a local carpenter. The initial thought to build a new altar came from the realization that Marist didn't have an official altar. True altars have relic stones embedded in them containing the relic(s) of a saint(s).  Father Theo is in contact with the Archdiocese of Portland to find an altar stone and once the altar stone is obtained, Archbishop Alexander Sample will make a trip to Marist to consecrate the new altar. Tune in to Spartan News Network for the full story of the making of the altar.

Freshman Kellie Schroffner paints an ornament at the freshman Christmas event. Photo by Toni Cooper
Throughout the past few weeks, seniors in the Christian Leadership Class have begun hosting a series of events in an effort to bring the class of 2024 together. On the first Thursday and Friday of December, CLC students kicked off the first of many events geared toward the freshman class with a sequence of “freshman conversations” — a long held tradition to help the freshmen get acclimated to high school.
This year, as one might guess, they were held on Zoom during the freshman theology classes. The one-on-one conversations are designed to give the freshmen an opportunity to interact with each other and ask the upperclassmen, who have been in their shoes, questions they have about life at Marist.
Last Wednesday and this Wednesday, CLC students continued their freshman-focused events with their “Two days of Christmas” gatherings complete with food, icebreakers, and cookie and ornament decorating. The events, designed to get the freshmen on campus for some personal interaction, spanned an hour and were filled with fun activities and lots of Christmas music.
The need for freshman interaction has been much needed and long awaited. “I wanted to participate in these events because I haven’t been able to get to know my classmates very much this year. I figured I should take advantage of any chance I could,” freshman Lexie Heckle said.
Many of the CLC students remember how important these events were to them when they were freshmen. “I wanted to plan and take part in these events because this is a hard year for freshmen. I felt like doing this event would give them opportunities to meet more of their classmates as well as have fun and see what the Marist community is about,” senior leader Jordan Lee said.
CLC students are not the only ones to put on freshman gatherings; freshman teachers have also noticed a need for freshmen to connect. On Tuesday, theology teacher David Haggard moderated 15 minute conversations over Zoom intended to help students continue forming connections.
Yesterday, freshman history teacher Tripp Nelson continued these conversations. "What is really driving this is the fact that our freshmen have not had the opportunity to get to know one another as well as our previous classes because of all the covid restrictions,” Nelson said. 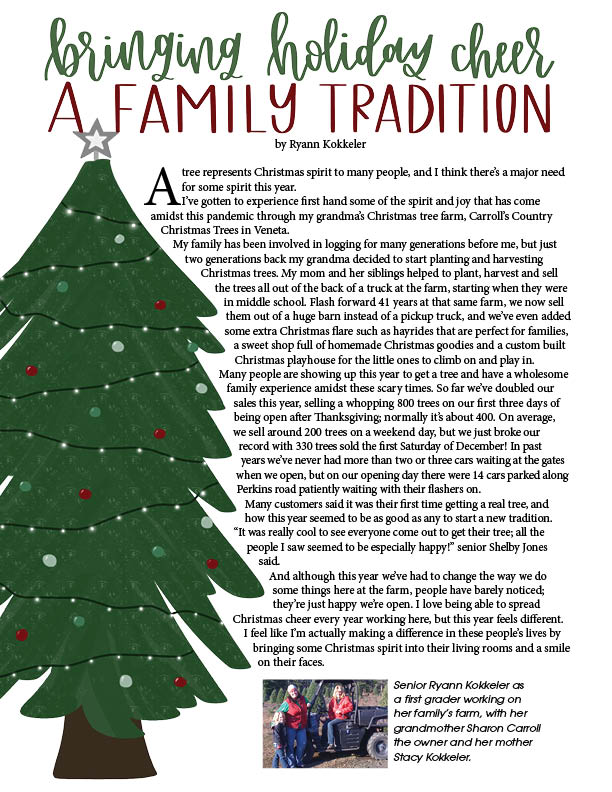 Last year, Speech and Debate moderator, Steve Barth, takes a selfie with members of the team. Photo by Steve Barth
Last week’s Club Fair looked a little different than in years past. Instead of making boards to advertise to students in the halls, Student Council moderator Beth Wirth and members of ASB hosted a Club Fair by asking club moderators to make videos which could be viewed via Schoology.
Below are some basic descriptions of the clubs students can participate in this year.
Speech and Debate Club is run by Steve Barth. Depending on what you’re interested in, there are 14 different events to participate in. If you are interested in joining you can check out the team website at www.maristdebate.weebly.com where they’ve linked helpful how-to videos and email coach Barth at sbarth@marisths.net -- be sure to include your name, graduation year, and parents’ name and email.
JAM, or Justice Action at Marist, is a new club this year dedicated to students interested in making their voices heard at Marist and in the greater Eugene/Springfield community. Their goal is to spread awareness about the issues of minorities and the marginalised in our community in order to create change. The Club meets on Spartan Days from 1:30-2:30 p.m. over Zoom. Email sophomore Alexandra Chavez at chavez90n@marisths.net for more information.
Pétanque Club is a French sport that you can play on Wednesdays from 2-3 p.m. on the Marist pétanque court next to the track. In pétanque, players stand and take turns tossing a ball at a smaller ball to see who can get the closest in each round.. The competition is won when a player reaches thirteen points. Email Mr. Baker at rbaker@marisths.org if you are interested.
Chess Club is not having usual meetings nor league matches. Several Marist students are participating in online matches with students from other schools. These matches are open to anyone that is interested. Email Mr. Nuxoll at jnuxoll@marisths.org if you are interested in joining.
Spanish will meet Wednesdays on Zoom and you can email Dr. Mombell at nmombell@marisths.org if you have questions or want to join. Model United Nations has also begun meeting this year and if you are interested, you can email Mr. Nuxoll or contact Senior Cate Carson.  Marist For Life is taking a break until the pandemic is over. 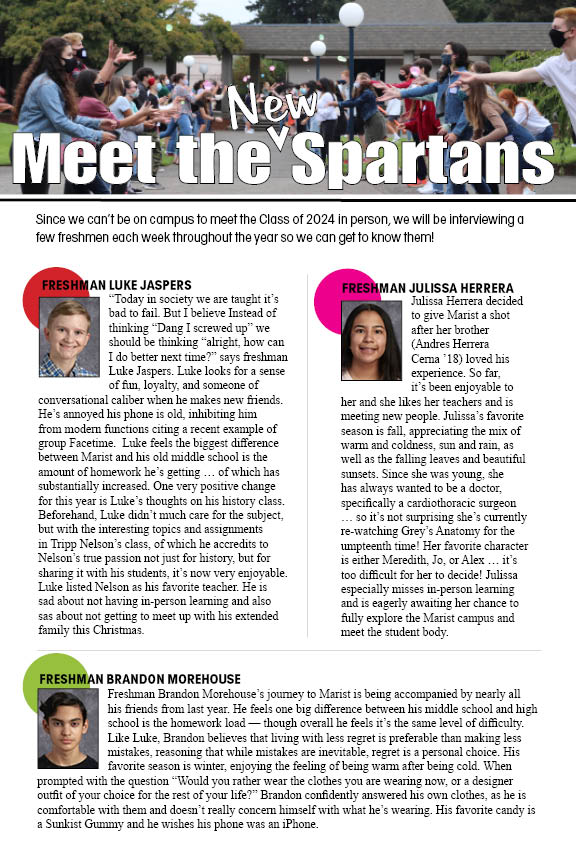